Tell us how you met and all about the proposal.
Peter proposed during the Munaluchi Coterie Gala. It was a complete surprise and very put of character for him. He definitely created an amazing memory.

WEDDING DETAILS
Wedding Style: Describe your wedding dress. What was wedding shopping like for you?
My wedding dress was long, glamourous and over the top yet classic enough that I’ll love it 50 years from now. It was a combination of chantilly lace, Giupure lace and beaded embroidery with 200 yds of silk for 14foot train.

Culture: Did you incorporate any culture into your wedding? If yes, tell us more.
Music-reggae
Cocktail hour food, jerk chicken & oxtail

Memories: What is your best memory from your wedding?
Peter crying like a man & My dads dancing. I also enjoyed peters mom crying during their dance.

Advice: What is the best wedding advice you can give to engaged couples?
Have fun, enjoy each other, the title fiancé &fiancee only last a short time, enjoy it all. Invest in the things that are most important to you for your big day.

Favorite item on the menu:
Everything!!! Filet for me, salmon for peter

First dance song:
All My life. By Casey & JoJo

CHECK OUT THEIR THEATRICAL TRAILER 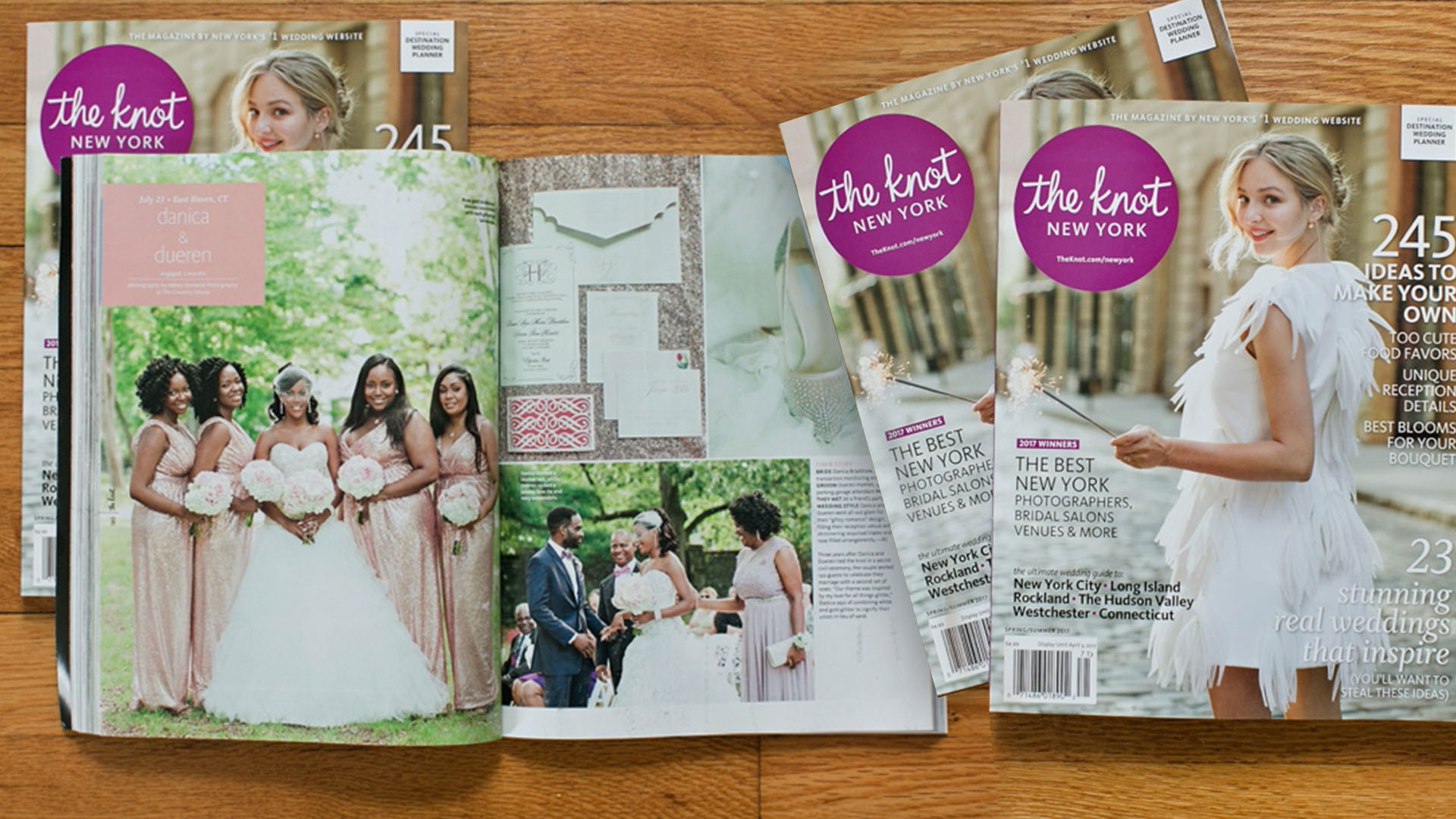 We are Super Excited to have one of our couples featured in this year’s issue of The Knot Magazine New York.

It is no surprise that Danica & Duren were selected to be featured in The Knot’s Magazine under the Real Weddings Category this year. From the tears to the turn up, their nuptials was a night to be remembered. We are so humbled and honored to be chosen to capture their memories through film. Here is a look into their amazing day through wedding video along with some amazing shots used in this year’s issue shot by Abbey Domond Photography 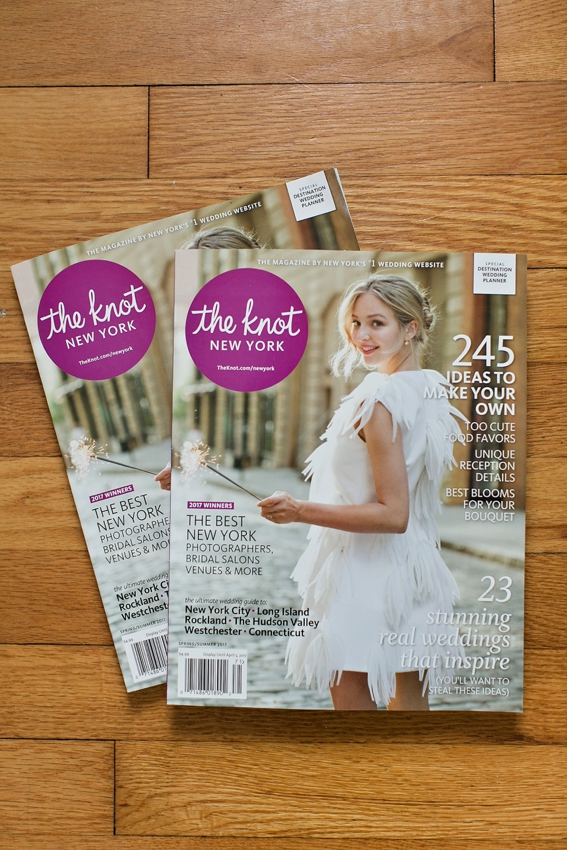 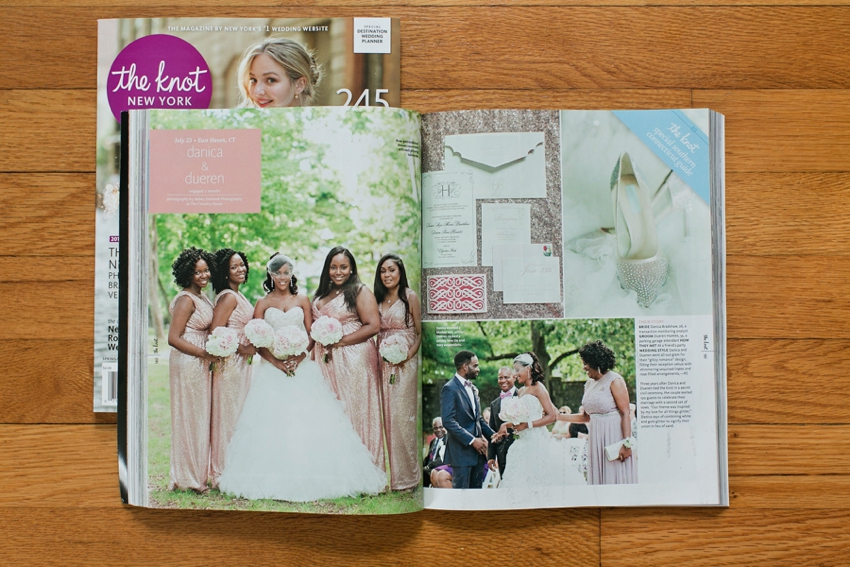 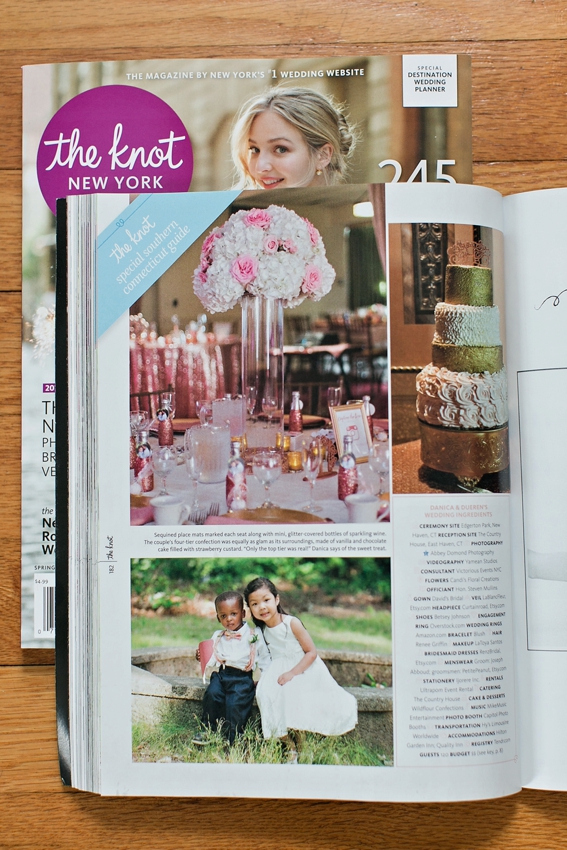 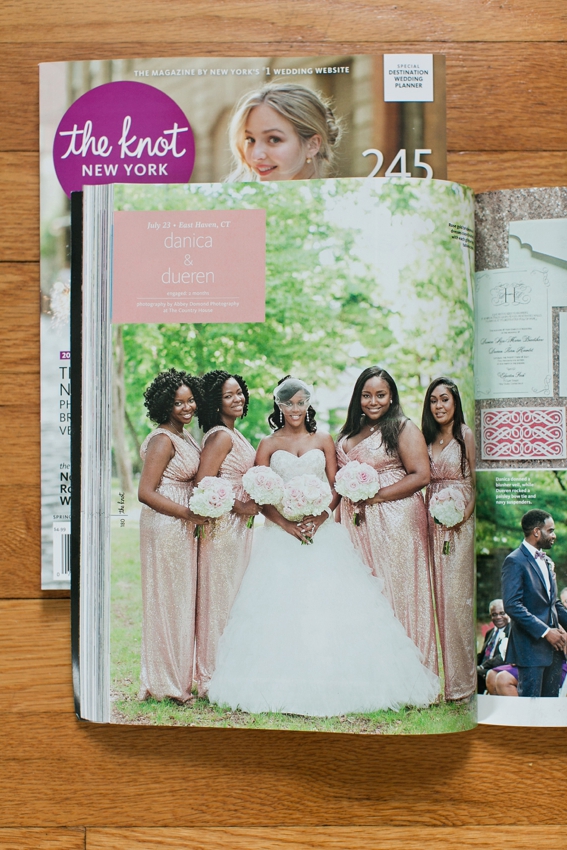 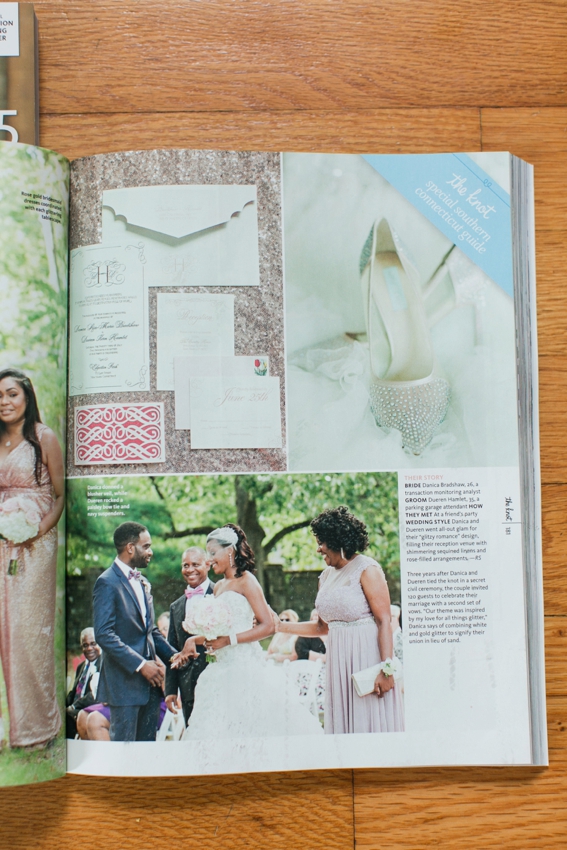 Tell us how you met and all about the proposal.
We met through mutual friends back in the summer of 2005 at an album release/ birthday party. After that we we casually dated throughout the years randomly lol sometimes we saw each other maybe once or twice a year until the summer of 2012. That’s when something really clicked and changed for us so we decided to really give us a shot.

The proposal was definitely a secretive well thought out plan and mission. Ryan got his cousin involved to help create and plan a fake birthday outing for herself which was suppose to include dinner and a broadway play. So her and few of his other family members would text me through out the weeks letting me know about the details of the night out. So the day came March 20th of 2015 where I decided to go get my hair colored and trimmed and when I got home there were a bouquet of flowers waiting for me from my boyfriend and I was pleasantly surprised because he had never given me flowers before in the 3 years that we dated. I know I probably should have suspected something just based off of that fact but we hadn’t seen each other in two weeks because of work. I thought nothing of it other then that it was sweet and he missed me. The day went on and I got ready for his cousins birthday outing. That day out of all days it was snowing and before heading into the city I got a text from one of the girls to meet at the Bryant Park Hotel at 8pm before we started the nights celebration. When I got to the floor the room was on I noticed the door was cracked open and I heard music playing. So I opened the door and low and behold I didn’t see the girls I saw Ryan dressed handsomely leaning against the window sill of the room. I was in shock and speechless. I didn’t know what to say because I was so surprised and I didn’t expect to see him not for one second as I walked further into the room I noticed flowers and edible arrangements the ambiance was beautiful and still in shock I took off my jacket to be led out into a balcony over looking Bryant Park covered in snow. He places a towel on the snow and drops to one knee all the while I’m still in shock he then says something that I can’t remember for the life of me then asks me to marry him and I say yes. It was magical and romantic and such a surprise. He then presented me with a video blog he worked on throughout the 2 weeks of his planning and preparations I couldn’t believe it. He thought everything through, still in shock I called my parents to tell them the great news. It was so surreal that my voice had gone up an octave higher the whole time I was speaking lol He told me we had to go because he had made dinner reservations and I said ok but are the girls coming to meet with us and he laughed and said no. After everything I still thought some of his family was coming out that’s how good the planning of the fake birthday was.

CHECK OUT PART OF THEIR LOVE STORY.

WEDDING DETAILS
Wedding Style: Describe your wedding dress. What was wedding shopping like for you?
My wedding Dress by Augusta Jones was a customized order inspired by her Jo dress. It was an ivory colored lace adorned with translucent sequins with a cream underlay. The shape was an a-line fit and flare sillouett with long illusion sleeves. My wedding shopping was overall a great experience with a little bumps lol I went to 3 different stores and I found my dress at Kleinfelds which happened to be my third experience looking for and trying on dresses so because the dress was a trunk show new design I had to trust God and believe that my dress would come out beautiful because I couldn’t even try it on since it wasn’t created yet. But God is good lol

Culture: Did you incorporate any culture into your wedding? If yes, tell us more.
Not really, just chose some Latin/ Reggae music to be played by the DJ during our reception.

Memories: What is your best memory from your wedding?
Best memory would be the ceremony. The presence of God was there and in conjunction with what the officiant had to say. Definitely a highlight.

Advice: What is the best wedding advice you can give to engaged couples?
Take it one day at a time. Stress might come but just continue to love on eachother. Try to be very understanding in those few months before the wedding. Make it a priority to shut the planning button off and put it aside from time to time to focus on your relationship because it can get overwhelming so you will need a break lol 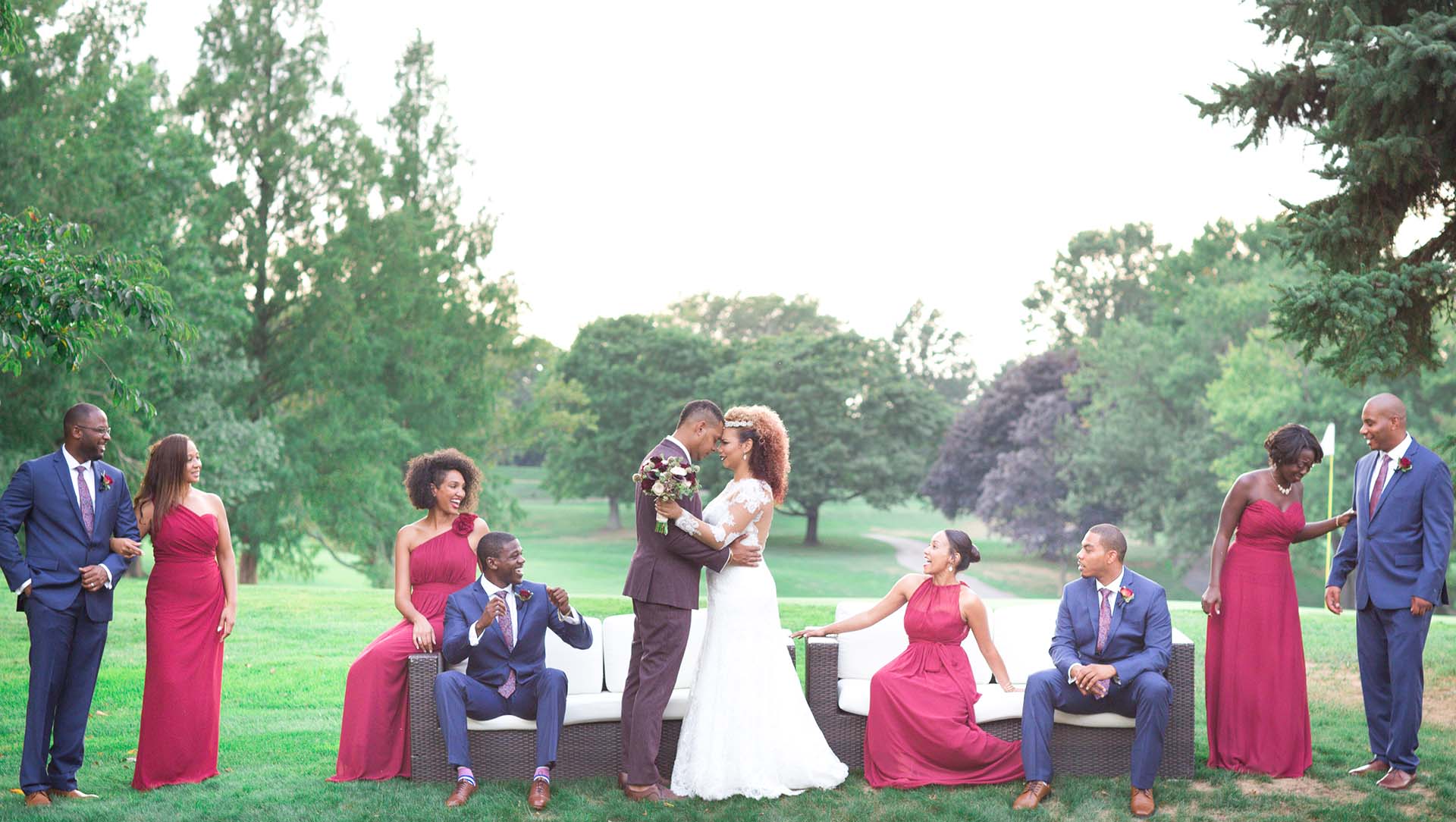 QUICK FACTS
Bridesmaids/Groomsmen gifts:
Bridesmaids – Bridesmaids got a Sabon compact mirror in a heart shape that says “Love Beyond Words” a bracelet with a key on it from Alex and Ani and a physical copy of my latest album called “Sheena

Favorite item on the menu:
The Seabass entree 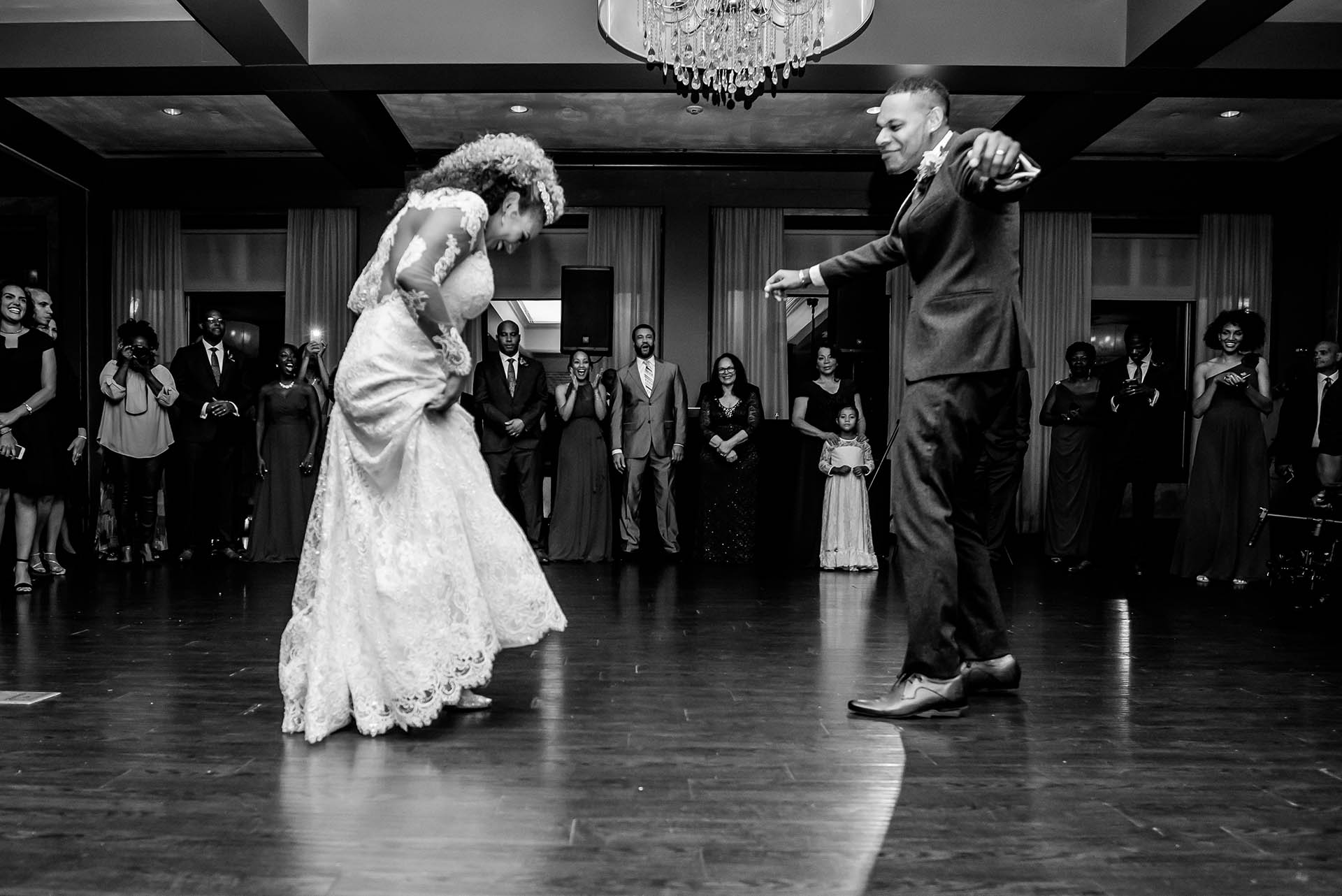 Tell us how you met and all about the proposal.
We met many years ago at Nathaniel’s cousin’s (who is Ashleigh’s best friend) graduation party. Throughout the years we’ve run into each other in passing multiple times, always taking note of the other but never saying more than a few words to each other. Finally in 2014 with some gentle nudging from well meaning family members we were made aware of each other’s mutual interest and the rest is history. Since the first phone call we’ve been inseparable. It didn’t take very long for us to realize that this was it, and that we were both in it for the long haul.

Nathaniel popped the question at sunrise on the beach in Ocean City, MD. A special place for both of us as it was the first trip we took together over a year ago. It was a perfect moment and we are so excited to be spending the rest of our lives together.

WEDDING DETAILS
Wedding Style: Describe your wedding dress. What was wedding shopping like for you?
Wedding dress shopping was the most fun thing ever, every dress looked amazing so it was hard to narrow it down. I was looking for something elegant and classic with a wow factor.!

Culture: Did you incorporate any culture into your wedding? If yes, tell us more.
Our DJ played only soca and reggae for most of the night as a nod to both of our backgrounds.

Memories: What is your best memory from your wedding?
Dancing on the dancefloor with everyone, photobombing the photobooth, dancing with my dad (Ashleigh), just getting to spend time with everyone we love in the same room.

Advice: What is the best wedding advice you can give to engaged couples?
Keep it as simple as possible because it flies by.

Favorite item on the menu:
The entire cocktail hour!