While the names and locations in this story are fictional, it is based on real and unfortunate wedding videographer horror stories that we have heard first hand from friends, contacts, wedding guests, clients, etc.

IT ALWAYS STARTS WITH THE SAME LINE

“My Uncle Joe has an amazing camera, I think I am going to just pay him $500 to shoot my wedding.” While Uncle Joe may be very good, here are a few reasons to go with the professional.

Wedding cinematography is so much more than just having a nice camera. Uncle Joe may have a nice camera, in fact, let’s say Uncle Joe is a lawyer and video is his passion. So, not only does he have a nice camera, but he has the best camera money can buy at the moment, the Canon 5D Mark III ($3,500). Even more so, Uncle Joe loves shooting in his spare time so much that he even bought a full set of Canon L Series lenses and accessories ($15,000).

Already, we are assuming that this Uncle Joe is much more prepared than 99% of the Uncle Joe’s out there. Now let’s assume that Uncle Joe frequently goes out, once or twice a month and shoots nature and urban scenes with all of his great equipment. Uncle Joe even had some of his work published.

Wedding time comes, and Uncle Joe is feeling great and confident that he is going to do an awesome job. Uncle Joe starts with some outside shots of the preparation location and everything is looking good. Then Uncle Joe steps inside where the preparation is taking place. Uncle Joe doesn’t like manually focusing his videos, so he shoots with the cameras help. Unfortunately, the camera is only so smart.

Uncle Joe starts filming preparation shots and notices that his lens isn’t wide enough. So, he quickly goes out to the car to swap out his lenses since he wasn’t anticipating this problem. When he gets back, the bride’s makeup is done, and now they are working on the hair. Uncle Joe didn’t take any time to check out the lighting prior to the shoot, so he has no off camera lighting, or any additional lighting equipment. So, Uncle Joe figures that he can just raise his ISO settings super high so that he can capture enough light to properly expose the scene. This works, however, little does he know, that every thing he shoots will be too grainy to show on any TV beyond 36″.

Uncle Joe now heads over to shoot the groom. Uncle Joe looks at the scene and adjusts his camera settings based on what the camera reads. Unfortunately, because there was so much black in the scene from the suits, the camera was over exposing all of the shots to compensate. Uncle Joe didn’t realize though, and just kept chugging away.

Let’s say this is a simple wedding and now it’s time for the ceremony. Uncle Joe scopes out a great spot, pops on his zoom lens, and waits. The groom makes his way in, and Uncle Joe shoots him like a pro as the groom is coming down the aisle. The only problem is that all of his shots are out of focus because the subject was walking towards Uncle Joe, and he wasnt really good at following focus and the camera’s auto-focus just wasnt quick enough to get things in focus.The father and bride begin coming down the aisle, and just the same, Uncle Joe films away. Again, none of which are crisp and in focus.

The wedding ceremony is going great, and Joe grabs several great shots. But Uncle Joe realizes again, that his camera lens isn’t wide enough, so Uncle Joe runs to his bag to grab a different lens. On his way back, he sees the couple just as they kiss for the first time. Uncle Joe missed it. He also didn’t think to shoot any of the bride or grooms family during the ceremony, as he was trying not to miss anything in the ceremony.

After the ceremony, it’s time for formals. Uncle Joe guides everyone to his favorite spot outdoors where he has a beautiful shot of the view. The subjects are facing away from the sun, so that he can capture the grandeur of the scene. Because the formals are being shot in the bright noon-day sun, Uncle Joe doesn’t realize that the camera is under exposing the entire scene since the background is so bright. 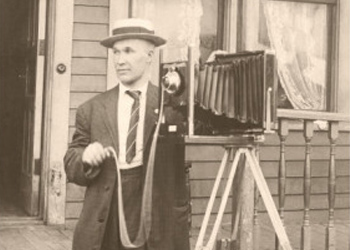 Uncle Joe takes only a few shots of the family formals – Little to Joe’s knowledge, every shot is coming out too dark and completely underexposed (See below)

Reception time has arrived, and Uncle Joe has already worked 8 hours! He figures that he should relax and enjoy the wedding too since he is family. So, he gives his camera to his young son who loves filming and cameras and tells him to shoot.

Uncle Joe is so exhausted that he doesn’t shoot for the rest of the night. I mean, he is helping out the bride and groom so much by saving them money, and doing it for so cheap that he figures it shouldn’t matter anyway.

Since Uncle Joe doesn’t have the software, or even know how to post produce video. He simply gives the bride and groom a DVD or download with all of the footage burned to it. The bride and groom sit down, dying with anticipation and pop the DVD into the computer to start looking at their uncles beautiful work!

5 minutes into the 10 hours Uncle Joe shot, the bride is already in tears, as all the footage is too dark, too bright, blurry, or just not that good. Furthermore, the bride and groom notice that there is no footage of their first kiss, and the only reception shots were of Uncle Joe’s son filming all of the kids at the reception.

While this story in particular is fictional, each one of the events and outcomes are from real situations that we wedding cinematographers hear about all of the time. In fact, so many of our client’s guests have approached us during a shoot to tell us about their “Uncle Joe” experience, and how they wish they had hired us to shoot the wedding. So, why does this happen to Uncle Joe? Because the bottom line is, while Joe had all the professional gear (which is unlikely in the first place), and experience shooting nature and outdoors scenes he doesn’t have the following:

While there are a lot of areas in your wedding budget that you can save money on, wedding cinematography should not be one of them. If you want to have professional – quality, creative imagery of your wedding day that will be timeless heirlooms to be shown and handed down to your generations to come, you will need professional wedding cinematographers.

Often times, wedding cinematography studios such as our own, will work with clients in customizing their packages in order to fit within their budget. If that is the case, choose quality over products. Choose to have 3 cinematographers rather than just two, and forgo the Blu-rays, DVD’s, and even the Cinematic Feature Film for now. We understand that newlyweds are often on a budget, as they are starting their new lives together. So, wait on the products until later in your life. Three, four, even five years from now when you and your family is well established, go ahead and order that feature film, or those Blue-rays. It might be better to wait to buy gorgeous and real imagery, than to have low quality video slapped onto a DVD and ready for you when you get back from your honeymoon.

To sum it up, while you can always order products later, you can never order better quality and more creative imagery after your event.